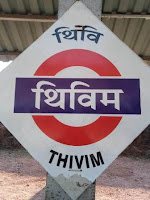 Thivim (also called Tivim) is a village in Nathivim in Bardez, in the North Goa district of Goa, India. Thivim is an important gateway into North Goa as the home to the major railway station in North Goa. The Thivim Railway Station lies at an elevation of 23 meter above sea level, and is part of the Konkan Railway, in the division of Karwar.
« Prev Post
Next Post »

It’s a really useful post for me for Dudhsagar waterfall trip . Very interesting, good job, and thanks for sharing such an informative blog.