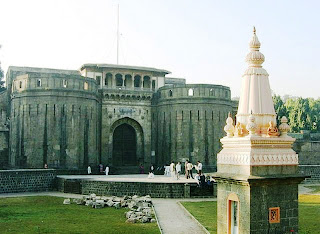 Shaniwar Wada is a palace fort situated near the Mula-Mutha River in Kasba Peth, Pune, Maharashtra. It was the royal residence and ruling office of the Peshwas in 18th and 19th Century. The structure was constructed by Peshwa Baji Rao I, the Prime minister to the fourth Maratha Chhatrapati Shahu. Shaniwar Wada is a confluence of Maratha craftsmanship and Mughal architecture. The Palace was largely destroyed in a big fire in 1828; only the heavy granite ramparts, strong teak gateways and deep foundations and ruins of the building within the fort survived.

Shaniwar Wada is known to be one of the most haunted places in India. It is said that full moon nights are very much haunted in Shaniwar Wada. There is a story behind this, according to legend this fort palace is haunted by the ghost of 14 year old Narayan Rao Peshwa. Narayan Rao Peshwa was cruelly assassinated by one of his relatives. His assassins chased him, all across the palace, the 14 year old boy ran to Raghunath Rao, his uncle, crying “Kaka mala vachva” (English Translation : “Uncle saves me”). But his cry remained unheard and little Narayan Rao was killed mercilessly. Even today locals claimed that they hear his cries for help at midnight on every new moon night.
« Prev Post
Next Post »