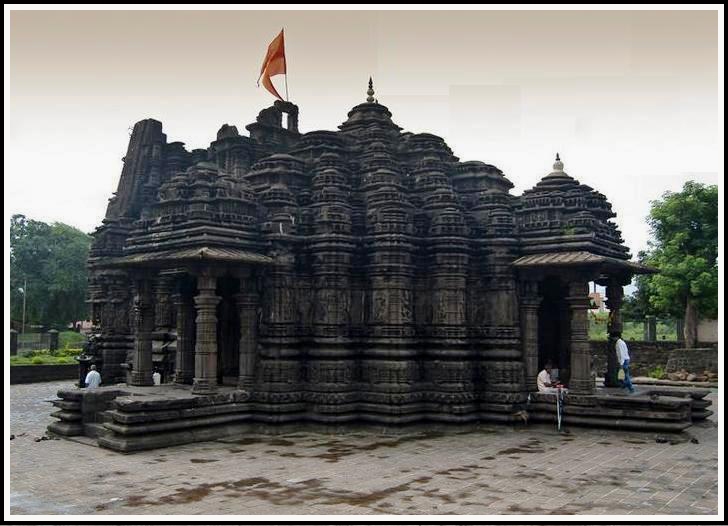 Ambreshwar Temple, the temple of Lord Shiva, located on the bank of Vadavan River, is very near to Ambernath Railway Station.

Situated in the hollow of a hill, the temple dating back from 1000 AD is wonderfully compact. To the south of the temple over the hillock most commanding view of the giant forms of Tavali and Malanggad or Bava Balang is obtained.

This temple is a fine example of the Vesara style that is essentially a tasteful blend of two schools of architecture, the Dravidian style and the Nagara Style, in simple words, a mix of the north Indian and south Indian styles of temple making. The versions of the Vesara style at Ambernath is of interlocking black stone in the Hemadpanti style named after legendary prime minister Hemadpanti who was a great patron of temple architecture during Devgiri Kings regimes.

The bold features are prominent in the heavily decorated outside wall and the stepped pyramid that forms the tower. The whole temple is executed in coarse brownish stone that is typical of this region. The plan of the temple is corrugated or fluted along its edges. The idea is to have a larger wall surface to accommodate a plethora of sculptures and other decorations that is the theme of this style. Had it been a straight outer wall only less that half of the sculpture could be accommodated on along the outer surface of the wall. The sculptures of Hindu mythology, predominantly Shiva theme, form a chain around the temple at the eye level. There are fluted molding above and below the sculptures. The tower is in the classic Nagara style. One can find the image of dancing Shiva on the tower.

There are three porches that give access to the central hall of the temple through a vestibule. The priests sit in this portion of the temple. This portion is intricately carved. The roof is supported by an array of pillars, which itself is a piece of art. Never forget to look up at the ceiling with all the details carved in stone. A Nandi (Bull) image is located at the center of the main porch, which is in the west. To reach the inner sanctum, one has to climb down 20 steps to go down in the main room called Garbhagriha (interior of the sanctum Sanctorum). There is one “Swayambhu” (self-manifested) Shiv Ling located at the center in this underground Sanctorum which is open to the sky. A big fun-fair starts two days prior to Mahashivratri and continues for a day after Mahashivratri to get blessings from the supreme god Shiva.
« Prev Post
Next Post »