Bhaje Caves Caves of Maharashtra One Day Picnic Spots
Bhaje caves are located at 18°43'40"N 73°28'55"E and are as old as Karla. Less than two kilometers away from the station of Malavli, is the village Bhaje – from the village begins the climb up the Bhaje Hill and caves. The climb is about 2 kilometers. The Bhaje Cave is much smaller than Karla but is perhaps more artistic. Altogether there are eighteen caves at Bhaje of which No.12 is the Chaitya and the finest of the lot. At the entry, sloping pillars are seen. There are 13 of them on each side to support the roof of the cave. A little way to the south of the principal cave, there is a group of 14 ‘dagobas’ (Stupa) some sheltered within a rock excavation, others exposed.

Among the several ‘viharas’ (Monasteries) on either side of the big cave there is one which deserves the particular attention of the visitor for the reason that they contain some very interesting sculptures, showing a prince on an elephant and on a chariot, protected by armed guards. The various stone staircases hewn into the side of the rocks both without and within the various caves are most fascinating.

From Bhaje, one obtains a distant view of the Visapur Fort, one of the strongholds of Shivaji. A road from Bhaje leads to the great ancient fortress.

How to reach Bhaje 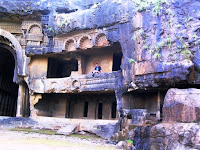