Ajanta Caves Caves of Maharashtra
Ajanta, situated on the slopes of a crescent hill side, hewn out of rock, are thirty caves, where two millennia ago Buddhist Monks found sanctuary and left a legend for posterity. A series of cave wall paintings and sculpture, elegantly executed, with an aesthetic appeal that is timeless and craftsmanship that astounds scholars and art lovers even today. The antiquity of these caves ranges between 200 BC and 600 AD. Despite their age, some of the paintings have retained their freshness and vivid detail wrought in rich earth colors. The paintings represent the life and teachings of Buddha. A large segment is devoted to Buddha's earlier life.

Ajanta was completely lost to human sight and knowledge for over 10 centuries. With the decline of Buddhism the caves lost their importance and everyone forgot all about them.

It was not till 1879 that through sheer accident they were discovered by the British soldiers in the thick and wild undergrowth. Twenty Nine caves were found one after the other. These are among the great wonders of the world. In almost every cave, there is an inner temple in which is enshrined a huge sculpture of Buddha. These caves are cut into a horse-shoe shaped cliff standing 75 meters high above a narrow gorge over a small river. The great artistic efflorescence at Ajanta came under the rule of Vakataka and Chalukya dynasties.

A few caves deserve special attention. The sculpture in Cave No.26 is elaborate and beautiful, depicting breaking of early ties and Buddha's passing into 'Nirvana'. The arched Chaitya window set into the elegant simple facade of Cave 9 is repeated in the elaborate frontage of cave 19 which has several figures of Buddha on the portico. Cave 16 is an elegant monastery with an epigraph that mentions the king and his minister who built this cave. Using metal mirrors to reflect sunlight into the inner reserves, monks and artists painted the wonderful paintings that still glow on these walls.

Ajanta is a protected monument under the Archeological Survey of India and has been included in the World Heritage list of monuments.

HOW TO REACH AJANTA CAVES 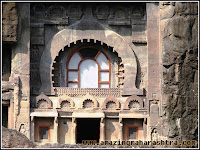 Nice blog, each post is beautifully written and depict the amazing view of Ajanta. Gives nice little experience of small trip to Ajanta.