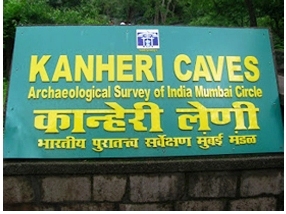 The Kanheri Caves constitute a group of rock-cut monuments that are located amidst the Sanjay Gandhi National Park. The caves are 6 kilometers from the park’ main gate and 7 kilometers from Borivali Railway Station. There is a park entrance fee Rs.33/- which does not include the caves ticket i.e. Rs.10/-. Tourists can enter after 7:30 a.m. The Kanheri Caves demonstrate the Buddhist influence on the art and culture of India. The word ‘Kanheri’ originates from the Sanskrit word ‘Krishnagiri’, which means black mountain. "Krishna" generally stands for Black Color. Chiseled out of a massive basaltic rock, the ancient monument has magnificent reliefs of Buddha and the Bodhisattvas. The caves were used by monks as a residence during monsoon and for congregational prayers. The Kanheri caves offers picnickers a getaway, especially during the rainy season. The hilly terrain of the caves creates several large and small waterfalls. The road from the entry point of the Sanjay Gandhi National Park to Kanheri caves is bisected by streams where families can enjoy lazy weekend gatherings.

1] Keep in mind that the caves are closed on Mondays.
2] Bring your own water – although there are fruit vendors at the site, there are no snacks available.
3] Do not stay near the caves after 5.30 pm as wild animals come down to drink water.
4] Avoid going on weekends as it really is crowded.

How to reach Kanheri Caves

The park has bus service to the caves but that service runs between 9 am to 12 pm and 1 pm to 5 pm, however the bus starts only when there are minimum 15 passengers. (Bus Fare Rs.33/- one way) 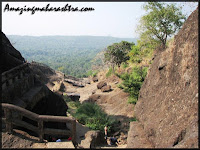