The Forts of Maharashtra Vijaydurg 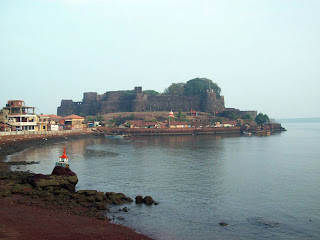 Vijaydurg, a sea fort, was built by Raja Boja II of the Shilhar dynasty during the period 1195 to 1205. The fort was located 225 kilometers south of Mumbai and 150 kilometers North of Goa. It is also an excellent harbor.

Vijaydurga Fort was called the “Eastern Gibralter” as it was built on a rock island in the mouth of Vijaydurga Creek, the fort was protected on three sides by the sea and on the east side by trench, now filled up. The area of the fort is 17.5 acres and the height of the surrounding walls is around 36 feet.

Vijaydurg is an ancient site and initially known as Gheria, it was extensively enlarged by the Adil Shahi Rulers and then by the Maratha King Shivaji. King Shivaji changed the fort name from Gheria to Vijaydurga after he captured the fort from the Adil Shah of Bijapur in 1653.

At the entrance door there is a Maruti Temple and inside the fort you can find the ruins of Lord Siva and Goddess Bhavani’s temples. There were few reservoirs to supply of water. The fort has many buildings and storehouses, now all in ruins except a structure called Rest House.

How to reach Vijaydurga Fort

Vijaydurga is well connected by road. There are direct MSRTC buses from Mumbai, Pune and Kolhapur. The fort is near S.T. Bus Stand.