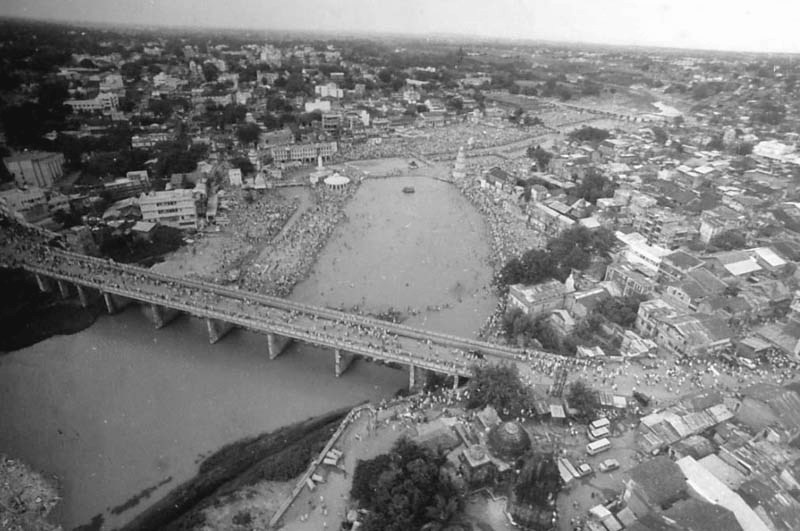 Nashik is a city in Western India is 171 kilometers far from Mumbai. The city is built on the gently sloping banks of the Godavari River, a goal for many pilgrims. Though they come to do Puja (prayer offerings) in the many temples on the river banks, the real object of their journey is to bathe in the sacred waters of the Godavari. The visitors purify themselves, according to their degree of sophistication, by dipping in a finger and touching it to their lips, by drinking a handful, or by bathing in it. Children have a grand time riding on the rapids and men manage to carry on their prayers undisturbed by women unconcernedly changing from their wet sarees a few feet away.

Nashik is one of the few cities which holds the Kumbh Mela every twelve years. This gigantic festival draws hundreds of thousands of pilgrims to bathe and cleanse themselves of their sins. Ages ago, the legend says, the gods and demons fought constantly for top position. Both found out that there was a Kumbh or pitcher at the bottom of the ocean containing nectar which would make the drinker immortal. The rivals pretended to make up their differences in order to share the heavenly drink, but after the tremendous joint effort of securing the pitcher, Vishnu snatched it and ran. The ensuing tussle lasted twelve days and ended in victory and immortality for the gods. During the fray, four drops of nectar fell upon Nashik, Ujjain, Haridwar and Allahabad, making them eligible to hold their own Kumbh Mela once every twelve years. The festival is held in one of these four cities every third year.

Nashik is also a town of shrines: the oldest (14th century) is the Kapaleshwar Mahadev Temple. Before you cross the river, you see the blackened 200 year old Sundar Narayan Temple. Most of the shrines are on the opposite bank –including the weather-beaten out well-proportioned Naru Sankar- and there are smaller temples plus a memorial to Gandhi built in the middle of the Godavari.

The environs of Nashik are dear to Indian hearts because they became the home of the three principal personages in one of India’s great epics: Rama; Sita, his wife; and Laxman, his brother, during their long exile from the court of Ayodhya. Up from the river, past the temple of the Black Rama in a large many-arched courtyard, is the cave Sita slept in. You can visit it if you are willing to crawl. In three tiny claustrophobic rooms underneath are the idols of Rama, Sita and Laxman.

The sacred source of the Godavari is at Trimbak, 19 miles away. Placed in a setting at the end of a long range of hills draped with waterfalls, the river has its birth high on a steep hill where water trickles into a cistern in which Hindus bathe. No wonder the Indians have revered their rivers from earliest times: the Godavari grows from this rivulet to water the plateau all the way to the Bay of Bengal.
« Prev Post
Next Post »

Thank you so much for educating me on Nashik, it sounds like a very interesting place. That's so very cool that it is a town of shrines.

This sounds like a lovely place. I love learning about places like this and to understand them from a different persons point of view.

That sounds beautiful. What a great tale, thank you for sharing I've never heard of Nashik or the festival and legend behind it. Just beautiful.

Thanks for the information. Learns something new everyday

I never even heard of this place before!

Wow, really informative yet entertaining! Never ever heard of this place before :)