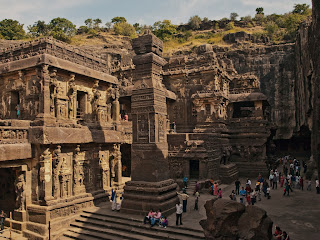 Kailasa Temple, the most impressive of all the temples of Ellora and one of the wonders of India. During the 8th and early 9th centuries, the greatest masters of rock sculpture produced this cave which is known as the Kailasa, the mountain dwelling place of Shiva. It is probably the world’s biggest monolithic structure, carved out of a single rock and its conception is simply breathtaking. Starting at the top of a cliff, a horde of stone-cutters removed three million cubic feet of rock to form a vast pit measuring 107 feet deep, 276 feet long and 154 feet wide, leaving a block in the center which was to become a temple rising from the foot of what had been a hill. But, despite its colossal proportions, this is all sculptured and its detail is worked as intricately as if it had been an ivory miniature.

This replica of the home of Shiva stands in an open country yard as three separate structures. The main temple rests on a base 25 feet high which appears to be supported by friezes of elephants. This temple measures 150 by 100 feet under a gabled front and a tower in three tiers beneath a cupola. An over head bridge links the three buildings of Kailasa and its outer gateway.

One gallery in this temple is devoted to a dozen panels relating legends of Shiva with an adjoining gallery telling the story of Vishnu as a man-lion, shredding the body of a demon with his claws. This demon was supposed to have been invulnerable to human or animal attackers, but Vishnu destroyed the tyrant by adopting a form which was neither man nor beast.

Then you will reach the masterpiece of this cave, the tale in stone of “Ravana shaking Kailasa”. Ravana, according to the epic Ramayana, was a demon who decided to show his strength by lifting Kailasa over his head. You can almost feel the mountain tremble in this piece of sculpture, but you are reassured by the unperturbed figure of Shiva who is taking care of his downstairs neighbor by merely putting his foot down so hard that Ravana is caught below. Parvati seems to be a little preoccupied: she clings to her husband’s arm as any young wife would in a similar situation.

Outside this temple and facing it is a smaller pavilion with the bull Nandi in front of it. On each side of the shrine to Nandi is a stone “Flagstaff” 50 feet high, covered with symbols of the Shiva cult in fine carvings.

Kailasa was begun under the reign of a Rashtrakuta King, Krishna-I, and its execution took 100 years. Even today, a visitor can only marvel at the vision of its unknown planner who was able to foresee this gigantic temple emerging from a mountainside. But Kailasa is not merely colossal: it displays perfect unity in its conception. Percy Brown, a leading authority on India Art and Architecture, has said : “The Kailasa is an illustration of one of those rare moments when men’s minds, hearts and hands work in unison towards the consummation of a supreme ideal”.
« Prev Post
Next Post »

It is a beautiful temple.
I was there some time back.