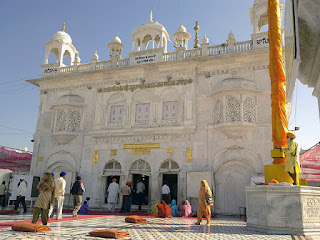 Hazur Sahib, is a 300 year old heritage Gurudwara is located on the banks of the holy Godavari river in the city of Nanded in the state of Maharashtra, India. This is one of the five Takhts (thrones) of the Sikh religion. It is the place where the 10th Guru, Guru Gobind Singh was cremated in 1708. The Gurudwara was constructed by Maharaja Ranjit Singh over the place where Guru Gobind Singh was cremated during 1832 to 1837. The Gurudwara is visited by millions of devotees throughout the year. It is a two-storey building. The interior of the Gurudwara is artistically ornamented in the style of Harmandir Sahib (Golden Temple), Amritsar. The walls of the inner room called Angitha Sahib have been covered with golden plates. The dome is polished and on the pinnacle is the Kalash made of gold plated copper. The building stands on a high base and has a small square room on the second floor bearing the gilded ribbed dome topped with a tall gilded pinnacle and umbrella shaped finial. There are some rooms in the basement too, so that the edifice is technically four-storied. Corners of the roof of the first floor are decorated with domed kiosks on octagonal pedestals. Other embellishments on the exterior included oriel windows and a fancy fencing on the roof top. Inside, the sanctum it has marble lining decorated with inset work in floral patterns on lower parts of the walls and stucco and tukari work on the upper parts as well as on the ceiling.

Guru Granth Sahib is seated in the room in front of the sanctum during the day time only and at night after evening prayer it is brought inside and placed on a marbled platform. During the day there are some old weapons and other sacred relics are placed on a marble platform includes a golden dagger, a matchlock gun, a quiver with 35 arrows, two bows, a steel shield studded with precious stones and five golden swords.

The building complex of the Takhat Sahib about is half a kilometer from the left bank of the river Godavari and is spread over about 525 acres of land. Besides the Takht Sahib It also includes two other shrines, Bunga Mai Bhago ji (comprising a large room where Guru Granth Sahib is seated and some historical weapons are on display) and Angitha Sahib (place of cremation).

Guru Gobind Singhji, while conferring Guruship on the holy Book, had named Nanded region as Abchalnagar (steadfast city). The word Sachkhand (region of Truth) was used to mean the abode of God.

Best time to visit is early morning or late evening when it is very peaceful and very beautiful.

The rooms are available in Sachkhand Complex and can be easily booked 15 days prior to visit.

There is Guru Ka Langar/community Kitchen which serves free meals round the clock for all the devotees.

There are other Gurudwaras nearby and easily can be reached via auto or taxis. Gurudwara Sahib has their own buses also that start every day in the morning from Gate 2. 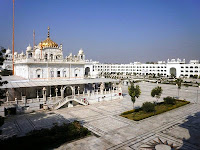