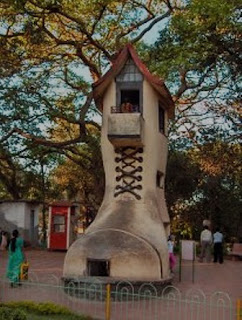 The east side of Malabar hill which we see from Chowpatty is covered with greenery topped by the Kamala Nehru (children’s garden named for Pandit Jawaharlal Nehru’s wife). It's a long way round to get there. The hill road goes through Walkeshwar, a largely Gujarati neighborhood, where most sarees are worn hung down over the right shoulder. (The Gujaratis are a large group in the city and handle most of the trade). Up on Malabar Hill, and below it on the west side by the sea, are the mansions of wealthy industrialists who made their fortunes mainly in textiles (Cotton grows in many places just north of Mumbai, and also in what is now the state of Gujarat).

Houses are built up and onto the rocks on the right, and down almost below each other, to the bay on the left. Many parts of the Mumbai have this domino-like scheme of house-construction; houses built not in straight blocks, but at angles, with other buildings coming in from all directions.

The Ridge road runs along the top of Malabar Hill. It leads pass the steep roads winding down to the Arabian Sea; all old novels of Mumbai found a place for car chase or two on these curving streets. The gardens and bungalows show you how beautiful Mumbai could really be if only there were fewer people and more rupees spent on re-planting . On the hill is “Sahyadri”, the residents of the chief minister of the state.

Malabar Hill, Cumballa Hill, and the area as far as the Race Course is the most fashionable localities. Women wearing the latest slacks zoom their Volkswagen or Mercedes-Benz into their driveways, only to drive out, an hour later, adorned with a languid and impeccable, last minute hairdo and saree. These ladies can even look demure if it is demanded, but you can be sure they are being truthful when they start off a conversation with a reference to their USA trip of the previous week.

Tucked off in a corner below the hill, on the sea, is a little village practically intact. Here are the Dhobi Ghats for the washing (and ruining) of clothes; nearby Walkeshwar Temple and a Jain Temple.

From here go to the Hanging Gardens. The fiery sheath of haze over the bay in the early morning, the heavy silence of noontide in contrast to the racking noises of the city are bound to impress you up on top of this hill. You have a sweeping view of the city from the sea to the mountains. Between the plumes of fire from the refineries in the north and the gardens, are bursting acres of homes, schools and shops.
« Prev Post
Next Post »