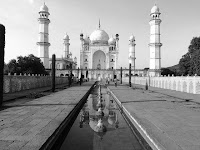 Bibi Ka Maqbara, also called the Taj of the Deccan, is a magnificent mausoleum situated in Aurangabad, Maharastra. This mausoleum is believed to have been built by Prince Azam Shah, son of Mughal Emperor Abul Muzaffar Muhi ud-Din Muhammad Aurangzeb, in the late 17th century, as a loving tribute to his mother Rabia-ul-Daurani alias Dilras Banu Begum. This mausoleum is a replica of the world famous Taj Mahal of Agra, the mausoleum of Arjumand Banu better known as Mumtaz Mahal. Bibi ka Maqbara was designed by architect Ata-Ullah, the son of Ustad Ahmad Lahauri who designed the famous Taj Mahal.

How to reach there