Archaeological Sites in Maharashtra Bedse Caves Caves of Maharashtra
Bedse Caves are fascinating in their carvings and the view from the height of their lovely situation in the Supati hills, is entrancing.

The Caves take their name from the village at the base of the hill on which they stand. The Caves are 300 feet above the plain and 2250 feet above sea level.

There are two principal temples at Bedse, which date back right from the first century AD. The Chapel Cave is uniquely constructed.

The entrance to the chapel has two huge columns which support the cave. These columns from the base to the top are superbly carved. On entering the cave at right is the pilaster which has figures of a man, woman and animals. The woman appears to be sitting on a fine horse. She is wearing jewellery and her garments are also discernible. The man is wearing an ornament on his head.

Adjoining the pilaster is a pillar which has similar carvings of horses and women riding them. The interior of the cave is 45 feet deep and 20 feet broad. There are several more pillars within the cave with various significant carvings. After the chapel cave, there is a large unfinished empty un-carved cave, next to which is the second principal cave of Bedse. It is 32 feet deep and 18 feet wide but is bereft of any designs since it was meant to be a dwelling place. Right in the interior of the cave is a figure of the goddess "Yemmai". 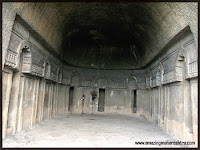 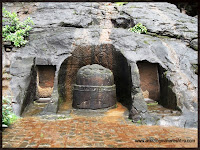 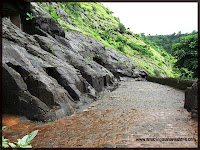